Last night was backpack distribution at NUAFA, a local nonprofit helping families with children recover from difficult situations. We collected more smiles and blessings from grateful children and parents.

Now the work of our visiting volunteers is drawing to a close although the work of FOC continues. Throughout the year, Karen fields requests from groups and individuals willing to bring donations or do a bit of community service while visiting the island. FOC makes connections between those with resources to spare and those who could benefit from some help.

Thanks to our regular local volunteers and leadership team including Karen and Larry (Cozumel/Iowa); Phyllis and Gary (Nebraska); Ilene and Byron (Texas); and Sandy, Ray, Nuria, Samantha, Lynn, April, Susan(Cozumel). And special thanks to our visiting volunteers including Roger and Diane (Nebraska); Barbara, David, Lara, Wil, Treva, Hettie and Mike (Texas); Lia and Calen (Ohio).

What lasting impressions do the volunteers have of their work during this mission week?

From Sami, one of our youngest volunteers: “I liked (working with) the kids with disabilities. They can play, they can touch and they can have fun. I liked that. It’s good that they didn’t have to be at home all the time.”

From Mike: “It’s a unique opportunity to share with families of Cozumel. Otherwise we get no opportunity to give back to the island that’s given us so much. It’s a blessing. I got lots of hugs. I got little hugs and kisses from the kids. You never get those in the U. S. except from your own grandkids.”

From Nuria: “I’m exhausted. But don’t print that. I actually had a great time even though I was working at a new job during that time.”

From Karen: I’m really excited about the focus on education. That’s really important to me. For example, we had a workshop for day care training for the first time, plus the day camp and that really benefits the community. They learned so much and it has an impact on families to help them become self-sufficient. It’s been great having (youth volunteers) Sami, Wil, Nuria and Calen with us, too.

From Larry: “It’s great to see the returning people who’ve done it before. They’ve been here, done that and they came back. Plus the new people who joined us—that was great. We’ve never had anyone say that it wasn’t meaningful. Everyone has said they plan to do it again.”

From Ilene: There’s nothing better than being able to come on a trip like this and bring my daughter and grandson along to develop a heart for mission work. It just doesn’t get any better than that.

Well said. It just doesn’t get any better than that. –Phyllis

Byron (left) and David (right) often worked in the heat on building and fixing duties. 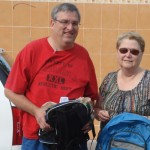 Roger and Diane Hoy were returning volunteers and donors. 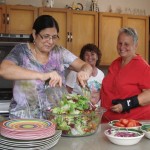 It’s not supposed to be about the food, but we sometimes forgot when April (left) was cooking. 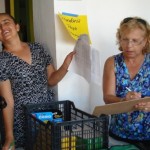 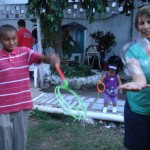 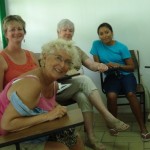 Children at NUAFA were happy to get the supplies they need to attend school. 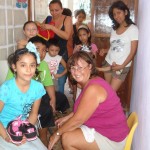 In addition to giving out backpacks, Sandy (lower right) did her best to fit children with new shoes, but more donations are needed. 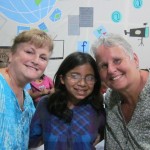 Sami (center) with Hettie (left) and Ilene (right), helped on nearly every project in the past week. 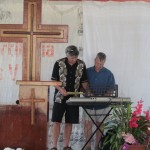 Larry (right) with Gary (left) provides music for a local church when he’s not building, toting, fixing or helping others. 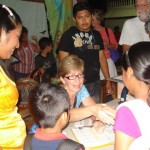 Karen (center) organizes many of the FOC projects for mission weeks as well as throughout the year. 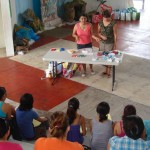 Nuria (upper left) served as a translator for many of our projects including helping Barbara (upper right) with the day care training workshops. 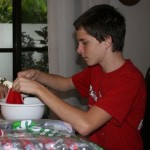 Wil helped with several projects including the carnival and day camp. 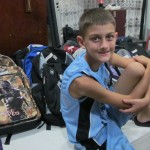 We found that it was sometimes difficult keeping up with some of the younger volunteers in our group. Calen served as our unofficial director of energy. 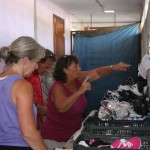 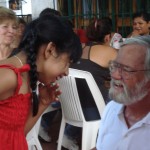 Mike (right) has many great qualities, but his beard is what thrilled Karla (left). 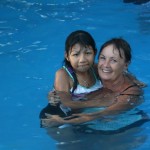