In one of the neighborhoods far from the tourist zone, the Vida Abundante church held a festival for youth and families. Friends of Cozumel created carnival games using our typical methods–constructing, re-purposing, making do with what we have.

Nuria designed and painted the backdrops for a bean bag toss and a fishing game. Larry and Calen fashioned a bowling game out of plastic bottles. A tub of water became a duck pond, and embroidery hoops became a ring toss game. Prizes were gathered from donors who must have had a ball at the dollar stores in the U.S. But you couldn’t have asked for more enthusiasm from those who took part.

The evening began with the crowd lining up for their free game tickets. Then everyone did the Chicken Dance followed by a heartfelt prayer from Pastor Mariela and David, FOC volunteer and chaplain of Texoma Chapel in Texas. It seemed a bit strange, but what better way to engage a crowd and remind us that we all have much to thankful for, regardless of our diverse cultures and beliefs?

Once the games began, it was a mass of warm bodies and even warmer smiles. As the FOC volunteers played the role of carnies, both kids and adults vied for the prizes. They stayed until the last ticket (and our energy) was spent.

It was a fun evening of church outreach to families that might not otherwise have an opportunity to hang out with a bunch of clowns. –Phyllis 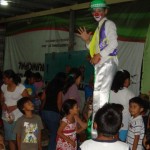 Clowns and carnival games attracted a crown to the youth and family festival at Vida Abundante. 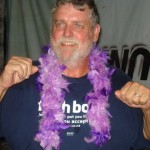 David is a chaplain and part-time chicken dancer. 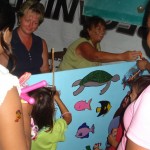 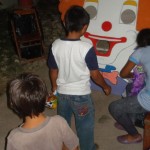 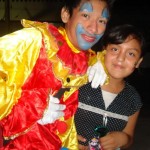 The clowns created smiles without saying a word. 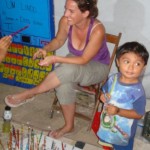 Lara was the carnie for the pencil pull with a guaranteed prize of a pencil every time.

Karen helps a little one with the duck pond game.

Calen helps with the bowling game. 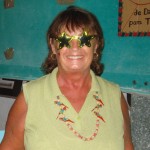 Sandy sports sunglasses used as prizes for the carnival games.